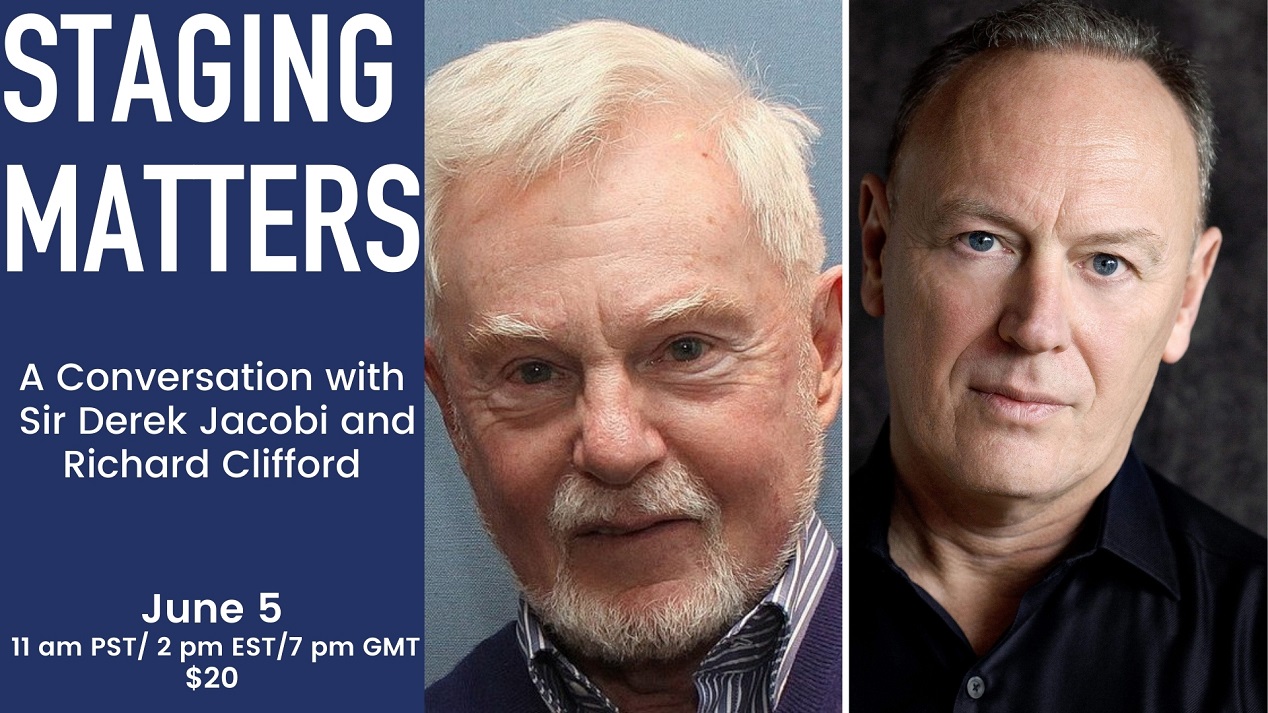 Hear iconic actor Jacobi and actor/director Clifford speak about theater, film, the classics, new works. And also… the authorship question: who, in their opinion, wrote the plays attributed to William Shakespeare? The hour-long session will include a thirty minute Q+A – so come with questions!

Sir Derek Jacobi, one of England’s most beloved and honored stage actors, has been acting for nearly 65 years. The son of a secretary who worked in a drapery store and a tobacconist/candy shop owner, Jacobi won a scholarship to Cambridge back in the days when almost all of its students had been expensively educated at Britain’s most expensive schools – except for those who, like Jacobi, showed great promise as actors and, as he did, won state scholarships, enrolling at Cambridge not to study but to act. (Jacobi studied history, but admits that he never went to lectures, spending all of his time acting and watching plays.) His international breakout role came at the age of 21 when he beat out Charlton Heston and Ronnie Barker to play the aged Claudius looking back on his life in a film based on Robert Graves’ I Claudius. Look for him also in Last Tango at Halifax, Vicious  (co-starring Ian McKellan), Frasier, The Tenth Man, Cadfael, and 45 other feature film credits. In 2016 Jacobi stole the show as Mercutio in Kenneth Branagh’s production of Romeo and Juliet. But despite all of his film successes, says Napa Shakes’ Laura Rafaty, “it is as a stage actor that Jacobi’s career is truly without parallel,” garnering him Olivier, Tony and Bafta awards, as well as an honor conferred on only two actors in history – the other being Laurence Olivier – not one but two Knighthoods (English and Danish.) Jacobi’s 2011 role as the eponymous king in King Lear is regarded as one of the world’s greatest performances of this iconic role.

“Actors, I don’t think, ever really grow up. I’m hoping that that rejuvenating process applies to me, too. It has so far. I’ve been very lucky.”  – Derek Jacobi

As an actor, Richard Clifford has starred with the Royal Shakespeare Company, on Broadway, and on London’s West End. He has shone in three Branagh Films, including the 1993 Much Ado About Nothing with Denzel Washington. As a director, Clifford has helmed numerous Folger Theatre productions, including Mary Stuart, The School for Scandal, The Game of Love and Chance, The Clandestine Marriage, Elizabeth the Queen (for which he won a Helen Hayes nomination), All's Well That Ends Well, and She Stoops to Conquer. In 2000 Clifford directed one of the most widely publicized events to mark the new millenium: A Salute to [Shakespeare], the Man of the Millennium.

“The most important thing you can do on stage is listen. I don’t think actors should prepare their roles in the bath.”  - Richard Clifford